Purple Martins are known as America’s most wanted bird. A purple martin can eat 2,000 mosquitoes a day and will eat nearly any type of flying insect. They are the largest of the swallow family and get their name from the male which is all black, but gleams iridescent purple in direct sunlight. Martins nest only in North America, and depend almost entirely on man-made housing.

Multiple compartment houses dot backyards throughout Shelby. The martin is the only swallow species that can be attracted to colonize in large numbers and return year after year. During the winter they can be found in South America 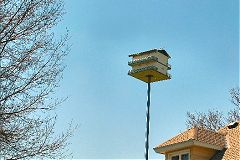